Roatan is the largest of the Bay Islands and is located approx 35 miles off the North Coast of Honduras.

Roatan is 32 miles long and varies in width from 1 to 3 miles across. The island is surrounded by nearly 70 miles of diverse living coral reef.

The inhabitants of Roatan speak Caribbean English and Spanish.

The Lempira is the official currency of Honduras. Major credit cards are accepted at larger businesses and cash advances can be made with credit cards at most banks. American Express Traveler’s Checks are also accepted.

Roatan is home to an International airport. American, Continental, Taca, Iberia and Sol Air all fly to Roatan in conjunction with local carriers.

Roatan offers a wide range of activities including PADI diving courses, snorkeling, kayaking, sailing, fishing, hiking, horseback riding, and glass bottom boat rides. Places to visit include the Institute of Marine Sciences, the Roatan Museum, and Carambola Gardens. Of course some choose to just relax in a nearby hammock or on the beach.

History of the Name Roatan

Roatan Island was named for the ancient Indian town of Roa that was located in the vicinity of what now is Port Royal on the island. Apparently this is the pre Columbian name of this town as well. The people of this primary village on the Island traded with the Maya as well as various Chibchan-speaking groups, some of which appear to have been the ancestors of the Bribri of Costa Rica who may of traded all the way to the mouth of the Apalachacola River on the gulf coast of Florida. Chibchan words have been found as far North in the US and Canada in the language of the Iroquois, and these Indians sent out annually trading parties that went overland as far as the Apalachacola River and traded with relative tribes and others along the route such as the Cherokee. The suffix part of the name ‘tan’ appears elsewhere in the New World, in such places as Yucatan, and may well have been of early Spanish derivation since one finds such endings in other ex-Spanish colonies such as the Philippines (Battan etc)

The village of Roa was the major village out of 4 Indian settlements on the island and was totally destroyed by the Spanish under the combined leadership of Villalva and Toledo from Havana and Guatemala in the year 1650 because 17th century buccaneers were using it as a base and Indians were providing them with food stuffs, instead of supplying the colonial city of Trujillo as they have been doing since the establishment of that Spanish port city. British Buccaneers had used the island for raiding Spanish Shipping off and on from 1564 and the Spanish had simply had enough. To my knowledge no archaeologist has yet looked for the remains of this ancient Indian village near Port Royal, and indeed it would be difficult to isolate out Inland remains from that of the late buccaneers, and still later pirates in the same area.

The Spanish simply took the name of the village and added and suffix ‘tan’, producing the word in Spanish ‘Roatan’, later corrupted by the English in the early 18th century to ‘Ratten’ and later still by Dutch map makers to ‘Ruatan’. There have been several other names for the island as well as ‘Rich’ island, given to it by the brief-lived Providence Company, organized by the Puritian Party in London in the year 1630, and named after Lord Rich who was their primary patron and financial backer, as well as the ‘Isle de Lyne’, of French derivation during their also short-lived attempt at colonization of this island. 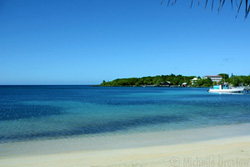